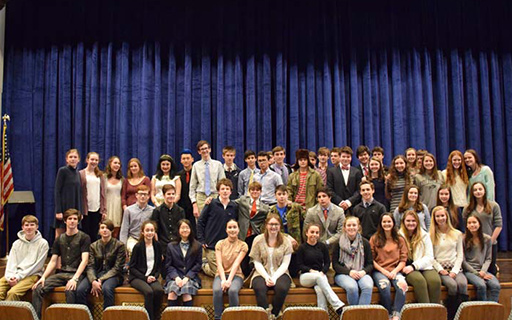 Fifty-one Bronxville High School freshmen and sophomores – who conducted extensive historical research over several months on a topic of their choice – have advanced to the Lower Hudson Valley Regional National History Day Competition, which will be held at St. Thomas Aquinas College in Sparkhill, New York, on March 10.

Their authentic work focuses on this year’s National History Day theme of “Conflict and Compromise” and is displayed in one of five ways – paper, website, documentary, performance or exhibit.

“The students were required to do the work of historians,” said social studies teacher Dana Landesman, who oversees the program along with teacher Christina Reidel. “They’ve been evaluating and analyzing sources and looking at varying perspectives to make a meaningful argument and support it with their research. This project also allows students to have choice and voice.”

The group of students advanced to the regional competition after being named winners in one of several categories at the schoolwide competition. As part of their research, many of them contacted experts in the field, analyzed the evidence and data they collected and developed theses that addressed the theme.

“National History Day was such a fun experience,” Natalia Morato said. “It was fun to be able to dive into research that I was interested in since my group and I picked our topic. Along with this, we were able to collaborate creatively to put together a final project that displayed our research that we had done after months of hard work."

At the regional competition, the students will be interviewed by professors and scholars and articulate what they’ve discovered through their historical research. Winners in that competition will advance to the state competition and ultimately to the national finals.