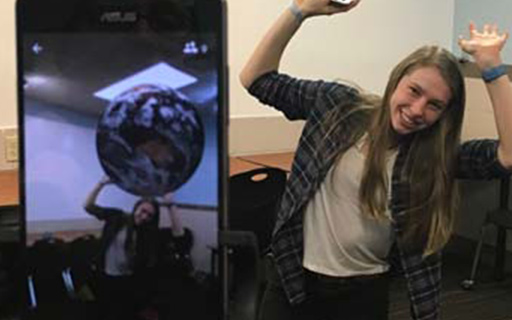 At the Bronxville School, fourth-graders in Heather DeCurtis’ class got up close to a tornado and tsunami, sixth-graders in Toby Gillen’s class circled around the planets and high school students in Denise Flood’s Latin class toured the Colosseum, thanks to Google Expeditions Augmented Reality Pioneer Program on Jan. 17. Equipped with smartphones and selfie sticks, the students tested the new program and wandered around their school’s board room or library as the augmented reality images – or 3-D images overlaid onto the real environment – appeared on their phones.

With the help of a Google representative, who loaded the application, the students walked around the objects and got in close to spot details. Meanwhile, their teachers used the Augmented Reality Pioneer Program application to guide their students to each image, provide educational information about the items and engage them with the immersive lessons. More than 300 elementary, middle and high school students had the opportunity to participate in the beta testing throughout the day.

DeCurtis said her students – who have been studying about different forces of nature in their classes – were able to explore tornadoes, hurricanes, earthquakes and tsunamis in a different way.

“The students appreciated getting to explore something in this context, which was something they have never done before,” she said. “I hope their experience added to what they have already learned and they were able to form some connections between what they were seeing and what they had learned through videos, articles and books. I also hope they enjoyed experiencing new technology. It was a great way to see that phones and apps can have an educational purpose, that things are always changing and new types of technology are always being created.”

Meanwhile, ninth- through 11th-grade students in Flood’s class explored images and artifacts from the world of ancient Rome, such as the Colosseum, a chariot, a trireme, a Roman sword and shield, Cleopatra and the streets of Pompeii.

“In Latin III, the students are reading the original Latin texts from which we have learned the information about the ancient world,” Flood said. “Currently, they are reading excerpts from Eutropius’ ‘Breviarium’ and Julius Caesar’s ‘Gallic Wars’ that discuss the history of the Roman Republic, prominent figures such as Cleopatra, and types of Roman warfare tactics including use of warships [triremes] and Roman armor and battle tactics like the testudo [shield formation].”

DeCurtis added that the augmented reality app allows students to explore sights they wouldn’t be able to safely experience in real life, such as volcanoes and tsunamis, and gives them an opportunity to visit historical sights that are no longer in existence or too far away.