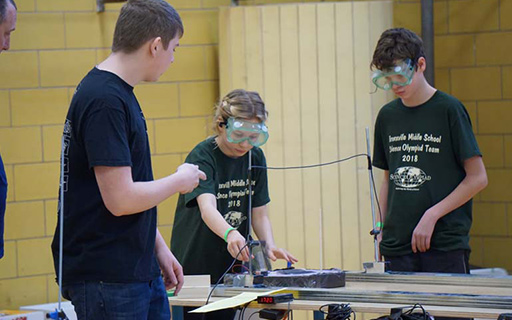 Members of the middle school Science Olympiad club took home medals when they demonstrated their skills in various scientific and mathematical disciplines at the annual Lower Hudson Regional Science Olympiad. The competition, which brought together students from 21 area schools, was held on March 3 at Scarsdale Middle School.

During the competition, which encompassed events on topics ranging from biology to chemistry, physics and earth science, the students participated in a variety of building tasks. They were challenged to build a motorized car that could go exactly 9 meters in the shortest amount of time, a roller coaster that allowed a marble to travel the track in a specific amount of time, a hovercraft, and a plane and a tower both made of balsa wood.

“At Bronxville, the goal of the Science Olympiad team is for students to have fun learning about science, get to know students across all of the grade levels and hopefully earn a few medals at the competition,” said eighth-grade science teacher Jean Windels, the club’s advisor.

Sixth-graders Chris Horvers and Lucas Sulimirski won first place in the Duct Tape Challenge by building the fastest sail car. In addition, Horvers and fellow sixth-grader Benji Atkeson won a fourth-place medal for their balsa wood plane. In addition, sixth-grader Jack Delaney and ninth-grader Amy Xu placed eighth in the “Positions and Poisons” event, which was a written exam in chemistry.

“The students met many other students from around the Lower Hudson Valley,” Windels added. “They all tried their best, rooted each other on and vowed to do even better next year.”