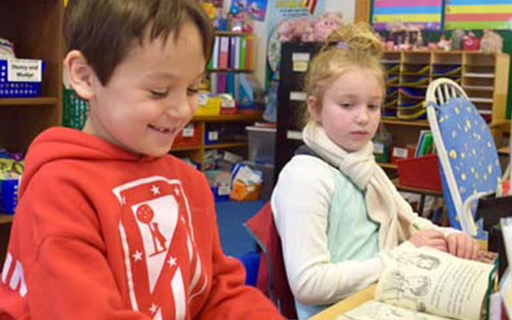 Second-graders – who have been reading a variety of books as part of the Books in a Series unit from the Teachers College Reading and Writing Project curriculum –recently examined the literary techniques that authors use in their books.

During a recent lesson, the students independently marked on Post-It notes the literary language – which refers to any words or phrases that are not meant to be taken literally – they found in their books. Then working in groups, they discussed with their peers what they think literary language means and shared the intended meanings of different phrases from their books.

“The second-graders studied the authors’ craft, and the goal was for them to notice that authors write in similar ways across the books in one series,” said Justine Rutherford, a second-grade teacher and curriculum leader. “They discussed book series in small groups, practicing many skills, specifically maintaining eye contact as others are speaking and ensuring each person in the group has a chance to speak. The students were challenged to ask one another questions to create a real conversation.”

Some of the book series that the students examined included “Bones Mysteries” by David A. Adler, “Cam Jansen” by David A. Adler, “Captain Awesome” by Stan Kirby, “Fly Guy” by Tedd Arnold, “Ivy and Bean” by Annie Barrows, “Mr. Putter and Tabby” by Cynthia Rylant, “Poppleton” by Cynthia Rylant, “The Boxcar Children” by Gertrude Chandler Warner and “The Kingdom of Wrenly” by Jordan Quinn.

“I like to read books because they’re really interesting,” second-grader Paige said.

The students are continuing to use their skills to write letters to other readers, state their strong opinions about the books they’ve read and craft book nominations as part of their writer’s workshop.