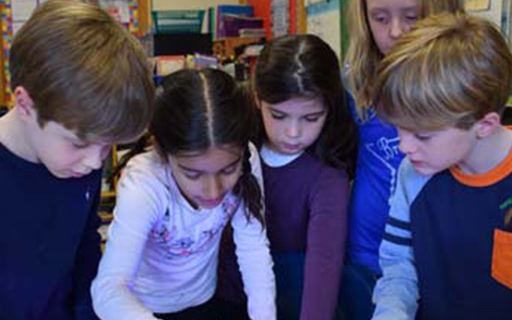 Second-graders in Lori Feingold’s and Meg Fischer’s classes recently broke away from traditional learning to solve puzzles in their classrooms. Using the puzzle-like systems, called Breakout EDU, the students worked together to open a box, which was secured with different types of locks.

Breakout EDU, an immersive-learning games platform, is a unique collection of resettable locks, boxes and items that can be used to play a variety of meaningful and educational games. Topics include math, science, history, language arts and more. Throughout the activity, the students used their creativity, critical thinking and communication skills to successfully work together toward a common goal.

“This innovative activity challenged the students to think ‘out of the box’ to break into the box,” Lori Feingold said. “They worked together to solve multiple puzzles and used additional clues to unlock five different locks. The students all took on a role during the activity and they were successful. They were beyond excited about the experience.”

The students had 40 minutes to find various clues and codes around their classrooms, including numbers, letters and arrow directions, to open the locks on their Breakout EDU box.

“This activity was great because it got the students to think critically and challenged them to put together things in their surroundings that they wouldn’t normally use,” Fischer said. “It was something new that made them problem-solve. It was interesting to see the different personalities arise.”