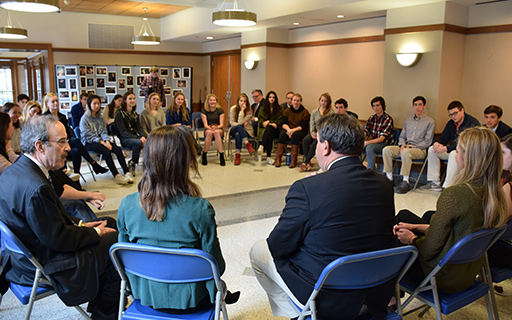 A group of seniors welcomed local and state representatives to their school on March 16 to discuss policy and share their feelings on gun violence, school safety and the policies they believe lawmakers should pursue.

Organized by teacher Christina Reidel, the students – from a variety of political perspectives and opinions on the topic – engaged in an open and respectful dialogue with Congressman Eliot Engel, Westchester County Executive George Latimer, Assemblywoman Amy Paulin and Bronxville Police Chief Christopher Satriale.

“The purpose of the meeting was for the students to have their voices heard and for lawmakers and policymakers to know how students in Bronxville, which represents suburban communities in Westchester, are feeling post-Parkland, Florida,” Reidel said. “It’s important for students to learn how to engage politically in a productive way. I wanted them to know that in the structure of our democracy, their representatives are responsible in answering to them. It’s going to be young people who will move us forward in some kind of positive way.”

Engel spoke about the laws he has sponsored and co-sponsored in Congress, and communicated that he believes in sensible gun restrictions. Latimer discussed his position on advocating for the Second Amendment, which protects the right of people to keep and bear arms, while also addressing the need for implementing sensible restrictions to keep society at large safe. Paulin, who has also been an advocate for sensible gun laws in the state, discussed her views and encouraged the students to share their thoughts and suggestions on the topic.

“You have a lot of power to lead a change,” Paulin said.

Caroline Kirby, senior class president who is interested in pursuing a career in politics, recently returned from a trip to Washington, D.C. She had been shadowing Engel for a few days and joined him on the lawn of the United States Capitol during the National Walkout Day.

“It was very important for our school community to be able to come together and talk about these issues that have become so increasingly important to us and to have our voices heard,” Kirby said. “Having this opportunity to begin to formulate our ideas and possibly create a change in the future is incredible.”