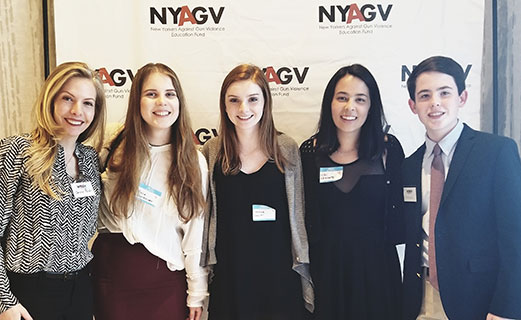 A group of Bronxville High School students, who had taken a stand in the debate on gun violence, were recognized for their efforts during the New Yorkers Against Gun Violence Westchester Regional Benefit, held in Eastchester on April 26.

Seniors Viena Pentikainen and Kiki Shinsato, sophomore Esther Devitt and freshman Michael Randall were invited to attend by Assemblywoman Amy Paulin, who was one of the honorees at the event. Throughout the evening, they heard from Paulin who spoke about the importance of listening to people with different points of view. She also discussed her efforts in legislation, including keeping guns out of the hands of those who commit acts of domestic violence.

“I used the opportunity to teach them how to network and build coalitions,” said teacher Christina Reidel, who accompanied the students. “The students were connected with other student leaders and organizations that fight gun violence. I hope they realized that their activism is valued and they have the power to make a difference in their communities.”

Through their work, the four students have proven themselves as leaders in their local community and engaged citizens who advocate for change, which are skills closely aligned with the dispositions of the Bronxville Promise. In March, a group of seniors met with Paulin, Congressman Eliot Engel, Westchester County Executive George Latimer and Bronxville Police Chief Christopher Satriale to discuss policy and share their feelings on gun violence and school safety.