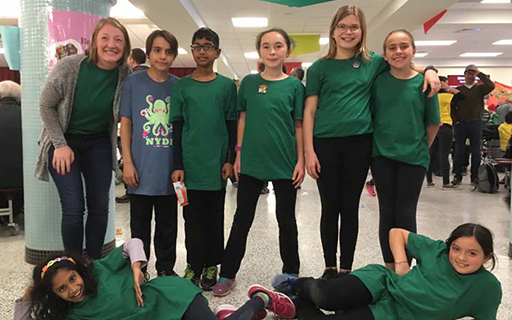 Fourteen students from Bronxville Elementary School worked together to solve challenges and present their work at the New York Destination Imagination Eastern Regional Tournament, which took place in Ossining on March 10. They were among more than 100 teams who represented school districts from New York City and Long Island, and Columbia, Dutchess, Greene, Orange, Putnam, Rockland, Sullivan, Ulster and Westchester counties.

Under the direction of teacher Jessica Wood, the two teams – the Bronxville Broncos (K-2) and Creative is the New Cool (3-5) – formed for the first time at the district this year. Members of the Bronxville Broncos include second-graders Tellur Beldotti, Dahlen Peters, Dylan Ramirez, Hadley Ramirez and Reef Wilson and kindergartners Olivia DeRousseau and Olivia Murphy. Members of the Creative is the New Cool include fifth-graders Alessia Cutaia, Linnea Hentschel, Liberty Wilson and Gamunu Withana, fourth-graders Julian Gonzalez and Olive Wilson, and third-grader Kavya Withana.

“One of my favorite parts of Destination Imagination is the focus on the process instead of just the product,” Wood said. “Our teams had so much to celebrate because we never put any pressure on winning. At the beginning of the season, I told them that we are competing against ourselves, not other schools. We’re working to be kinder teammates, effective communicators, flexible thinkers and fearless innovators.”

During the New York Destination Imagination Eastern Regional Tournament, members of the Creative is the New Cool team presented their service learning project, which focused on solving a real-life need in a community. The students decided to raise awareness about poverty and grow fruits and vegetables to donate to local food banks. Meanwhile, members of the Bronxville Broncos team presented their work on the Friends Everywhere challenge, which encouraged them to explore how children from different cultures live, learn and play. As part of the challenge, the students acted out a play that told stories about the similarities and differences between children from the United States and Australia.

“Destination Imagination allows students the opportunity to create, lead, problem-solve, collaborate and experiment,” Wood said. “In our first year, I’ve seen students find the confidence they didn’t know they had. I’ve seen students discover strengths in areas they didn’t even realize they enjoyed. I’ve seen individuals transform into teammates who put the needs of the group before their own.”

The program also fosters students’ creativity, patience, persistence, curiosity, ethics and respect for others through open-ended academic challenges. According to its website, the mission of Destination Imagination is to develop opportunities that inspire students to use diverse approaches in applying 21st-century skills and creativity.