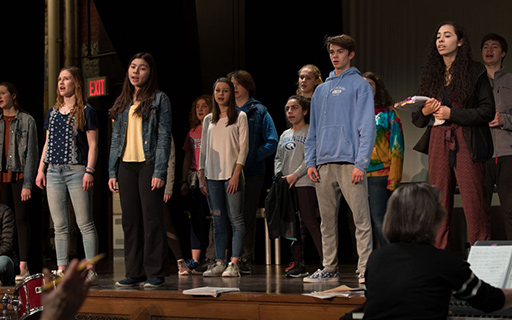 They’re creepy and they’re kooky, mysterious and spooky, and they are all coming to Bronxville from March 8-10. “The Addams Family” will come to life as this spring’s musical at Bronxville High School. The spectacular production features more than 95 students – as members of the cast, crew and orchestra – who have been working diligently on the show for the last three months.

“The Addams Family” is a musical comedy with music and lyrics by Andrew Lippa. It is based on the characters created by cartoonist Charles Addams, who depicts a ghoulish family.

“While our high school students didn’t grow up with ‘The Addams Family’ television show, they have taken this weird and kooky family to heart,” theater director Pamela Simpson said. “As they redefine normal, children of all ages will enjoy getting to know all the members of the family as well as their ancestors from years past. The ancestors, unable to get back into their crypt until love triumphs, reluctantly turn from darkness to light as they strive to help their beloved Wednesday find true love.”

Featured actors include Hana Eddib, in the role of Morticia Addams, and Matt Pytosh, who takes on the role of Gomez Addams, Morticia’s husband. Ally Bruno takes on the role of the family’s daughter, Wednesday Addams, while Sofia Fenner will portray the family’s son, Pugsley Addams. The family wouldn’t be complete without Uncle Fester, whose character is portrayed by Olivia Gravier; Grandma, who is played by Sara Billings; and butler Lurch, played by Jacoby Goodson. The audience will also meet Wednesday’s love interest, Lucas Beineke, who is portrayed by Ned McCann, as well as Lucas’ parents Mal and Alice Beineke, who are portrayed by George Cooney and Margaux Frohlich.