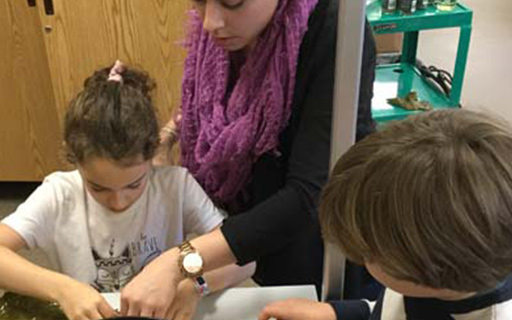 Third-grade students in teacher Justin Chao and teacher resident Krystle Tawil’s class rolled up their sleeves and immersed themselves in the Middle Eastern tradition of making stuffed grape leaves on Jan. 22. The activity was part of a learning experience that encouraged the students to enhance their awareness and appreciation for other cultures.

Tawil – a first-generation American, born here after her parents and grandparents immigrated from Palestine and Jordan to the United States when they were young – spearheaded the activity. She, along with her mother and grandmother, guided the students in the step-by-step directions of making the stuffed grape leaves.

“For the most part, the Middle Eastern culture and cuisine is not a culture that the students have had much exposure to,” Tawil said. “However, I do think it is one that they will have great interest in. It’s important for students to experience firsthand how other cultures are different from the American culture, not only with food, but with beliefs, language, society and so on.”

Throughout the activity, the students carefully observed the three generations of women expertly complete the rolling of the grape leaves, which contained a mixture of rice, meat and spices. They also learned about the difference in appearance and texture of each side of the grape leaf and discovered why the women weren’t measuring any of the ingredients. Afterwards, the students also had the opportunity to participate by placing the mixture onto the grape leaves, rolling them and placing them one by one into a large boiling pot.

“The students were so engaged and persevered through any difficulties when they couldn’t get it right on the first try,” Tawil said. “Overall, it was evident that the students enjoyed this event. They were so eager and excited to experience another culture, and it was great to see.”

As part of the third-grade curriculum, the students are studying about countries and cultures around the world. Prior to the activity, Tawil taught the third-graders a few greetings in Arabic, discussed how to appropriately respond when introduced to a new culture and shared information about the Middle East.

“Ultimately, I hope the students took away insight on how different cultures are around the world,” Tawil said.